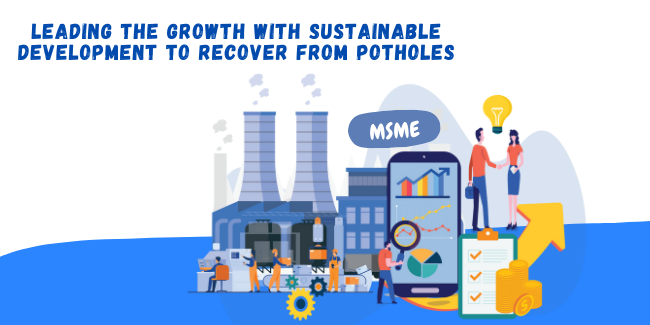 MSME: Leading the Growth with Sustainable Development to Recover from Potholes.

This pandemic has affected millions of people worldwide. For almost two years the world was in utter chaos as of thinking what to do next. Thousands of people lost their lives after battling hard to the virus, many of them lost their jobs resulting in a void in their lives. Hunger came into a major role as people lost their livelihood to sustain in this world. Many experts came with their theory of recovery but what matters is the rot level solution to the problem that ordinary people deal with. No matter in which era we are living, challenges always have their way to conquer the path and reach towards mankind. One such challenge which we fear to face in this recent time is “Recession”.
Life without food doesn’t even have a stand to exist in our dreams, then think of the people dealing with it in reality. It’s tough but even gets tougher when the future seems to be in pitch darkness. All that we wish for after destruction is “recovery”. The process towards the development after such a might attack will surely be slow. Sometimes it will look like nothing is happening as the steps that will be taken will act slowly towards betterment. Hope is the only thing that will keep alive, with prayers reciting that this too will pass and happiness will hit the shores soon.
If we closely observe the countries that were hit by COVID-19 virus, you can see that the head of the respective countries has taken major steps towards betterment. They are thinking for their people as lives matter the most. Our country too has a prime leader whose decisions have benefited a major amount of the population.
Recently our Honorable Prime Minister Shri Narendra Modi addressed the country and appealed to the people to promote the theory of Make in India and emphasizing the fact of becoming “Atma nirbhar” by making the goods in our country.
The theme of the yojana is promoting self-reliance. Being independent is the major key to everlasting success. Dependency reduces the efficiency that an individual or an organization possesses. The major part of an inclusive and sustainable recovery depends on a small-scale industry. The upper level of the organizations which are well equipped with technologies will sustain by making a slow recovery. But the main push to the GDP and further development will be given by small-scale industries.
The main factor that aids the support is generating employment, which will slowly contribute to dipping the percentage of unemployment. Employment means earning which will sustain lives and promote a happy and satisfying livelihood. The factors that aid in promoting small scale industries are:

We know the path which leads us to the future seems like is full of hardships and suffering. Time never halts for anyone, change is the only constant thing in this world. An inclusive and sustainable recovery is needed post-pandemic and it majorly depends on Small Scale Industries. Promoting being self-reliant aids in development, at the start, it requires good planning at the root level but once accomplished it make sure that consistency towards betterment becomes the primary outcome. All that requires is the support that our system and government can provide to the individuals who come forward with their great ideas. We need to make sure that support is evenly provided to the small-scale industries because to become big the first step is to make a start. “Atmanirbhar Bharat“ yojana needs support that could create wonders in the coming time and the major outbreaks towards its success can be given by promoting Small Scale Industries.